So it was laid on my heart back in November/December to put a jar up and every time I complained, whined or talked negatively I would have to put money in this jar. Well I ignored it for a while and then a couple weeks ago I decided not to ignore it anymore. Momma Jo and I were sitting in the living room talking and I said something negative and right then I got up and grabbed a mason jar a sticky note and a dollar. Thus dubbing it the blessing jar. I put it up next to our tv so it was in plain sight and some place we always saw to remind us. We decided that the money put in the jar would not be for us or any vacation or anything but to bless somebody else. We don’t want to reward ourselves for being negative, obviously haha! 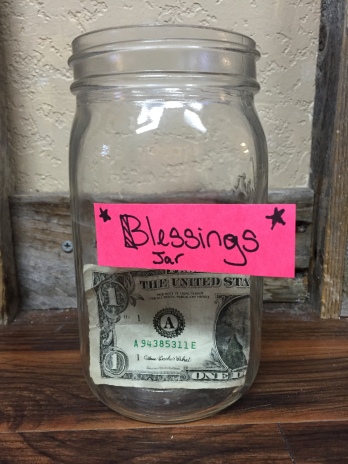 I think sometimes we all get so wrapped in the ya ya and the negative thoughts that this world has to offer that it becomes easy to think and speak negatively. We can go around and say did you see what she’s wearing or did you hear what he did? Yes you know we have all done it. Whined and complained about jobs, people, family, friends and just life. But that, I think is what is so wrong with today, we have lost the love and compassion for others. It says to love your neighbor as you love yourself. So who are we to judge others? What they do is between them and God, not between us and them. So let’s stop judging, stop whining and spread the love people! Remember that scripture John 3:16 “For God so loved the world that He gave His one and only son” yes that’s how much He loves us! Take hold of that. Let’s spread love and positiveness, by lifting up others, encouraging others and offering up kindness! The only way to change is to start with yourself hence our Blessing Jar! We are learning to take hold of what we say about ourselves and others. Words are so powerful and out of the mouth the heart speaks it says. Yes I know none of us are perfect but we should strive to be the best us possible. Imagine if there were more kind and loving people around what life would be like. We would stop and help others, we would see someone down in the dumps and lift them up and not ridicule them. We are all on different paths in life and all have struggles. Imagine when your are down in the dumps what a kind gesture does for your spirits.

I even just read an article last week about a little boy who had a bad temper and wanted to get rid of it. So his dad gave him a bucket of nails and a hammer and for every time he got angry he hammered a nail into a wooden fence. It came one day when the nails were less and less and then no more hammering them in. So he told his dad on when he made it a whole day! His dad had him pull out a nail for everyday he held his temper until they were all gone. Then he took his son out and said look son look at all the holes in the fence. When you say things in anger, they leave a scar just like this one. You can put a knife in a man and draw it out. It won’t matter how many times you say I’m sorry, the wound is still there.” I just thought this was beyond powerful! Just think all the negative things we say about each other ourselves, our jobs and our lives. It just puts holes in things. God created you in His imagine which makes you perfect just the way you are. So let’s change our thinking take hold of the words we say.

Just think how powerful you will be if you let the positive thoughts flow! Let’s set examples for others and be powerful lights sharing and spreading His love!! As wise woman last week said stop and “Check it through love first!” so check it through love before you say hurtful or negative things. You are beautiful, powerful and wonderfully made!!! Show let’s show grace and style and rock this out and spread the happiness and love!